Published April 2, 2013
Despite never getting a tracking number or official confirmation that it had been shipped, a wonderful surprise– well, not exactly a surprise, since I ordered it, but I had no idea when to expect it– showed up in my mailbox, a few weeks ago, courtesy of Julep. 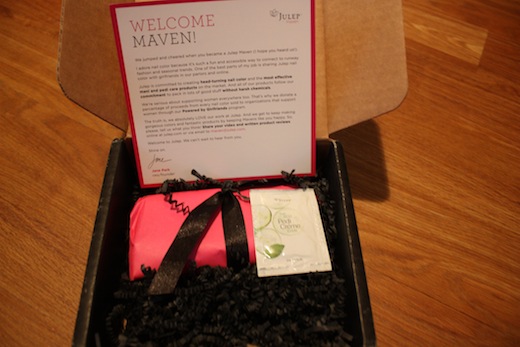 I was immediately impressed when I opened the box. It was adorably packaged with pink tissue paper and black confetti ribbons. In addition to the three nail polishes I expected, there was a foot cream sample that was really smooth when I tried it out.

When I ordered my first, free, trial box there were a few different options I could pick from. Julep determined which style profile suited me best based on a short quiz, but I didn’t have to go with that box and ultimately decided not to. While three of the five Maven Style Profiles come with two polishes and a product, one comes with two products, and the one I went with, It Girl, comes with three nail polishes. 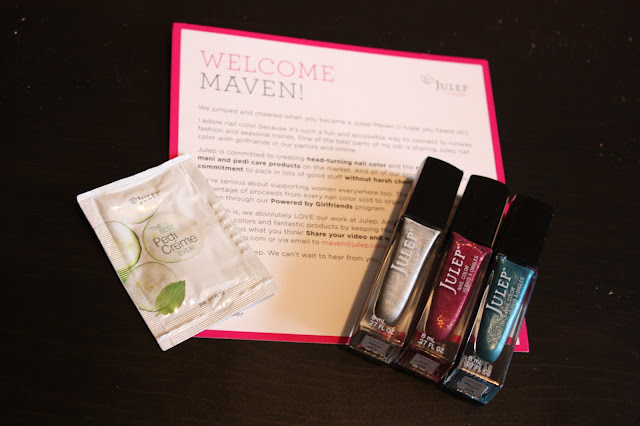 Each of the polishes has a female name, and some are even named for certain celebrities that suit the colours. I got Rebel, a silver holographic polish, Joan, a dark pink with gold flecks, and Marion, a dark blue-green turquoise.

So the most important question– how were the polishes? Well I loved them. I’m not a huge fan of Julep’s bottles, because they are pretty long which means that there is often polish on the “wand” above the brush which I had to sorta wipe away on the side of the bottle in order to stop it from dripping, but their colours are fantastic. The bottles themselves are pretty small, at only 8mL, which isn’t something I expected and is good to know when ordering. Full price the polishes are $14, which is pretty expensive for a small bottle, but the quality is excellent. All colours were fully opaque in one to two coats, and had a great shine to them even without top coat. The reason this post is a few weeks late is that I didn’t want to review a product before I’d tried it, so I waited until I’d tested out all three polishes and I took photos of them when I wore them. Spoiler: I loved them all!

All photos were taken with a basecoat by Revlon, two coats of the Julep polish, and a Seche-Vite top coat except for Rebel, which had no top coat because I’d read you shouldn’t use them with holos.

When I first took it out of the box, I thought Rebel was just a pretty silver shimmer, which is sorta how it appears in the first photo, but as soon as I looked at in the light I knew… it was the kind of holo I’ve been wanting for ages. Unfortunately I didn’t realize until now exactly how difficult they are to photograph, especially when there aren’t really any sunny days, but hopefully this gives a bit of an idea what it looks like (and it may be worth Googling to find a better swatch if you’re interested). It applied smoothly and it’s definitely my favourite of the batch because I can’t wait to wear it again this summer when there’s a bit more light to really show of its brilliance.

The second polish I tried was Joan. As I tried to show with my swatches, there is definitely a gold glitter in this dark pink, raspberry colour but in indoor lighting it’s not that visible. In sunlight, the shimmer is gorgeous. I’m not a huge pink fan but this is definitely one I’d wear again. It’s not my favourite polish ever, but I think it’s a really classy colour, and like I mentioned, the opacity was amazing.

The colour I’m wearing at the moment is Marion. I think this is supposed to be blue, but depending on the lighting, to me it definitely shows up as a having a green tint to it. It also has a pretty silver shimmer that helps make it sparkle. If anything it was a tiny bit thick, but the pay off is great coverage and shine.

The Maven boxes themselves are $20 a month, and you get over double that value in product so it’s definitely worth it. If you’re interested in signing up you can use this link here. I purchased a mystery box promotion for the month of April that will come up with a bunch of polish I’ll be sure to feature, so I decided to skip out on this months’ Maven Box– which is really easy to do if you don’t like the boxes, or maybe want to save money that month. Still, I am signed up and excited for May. Hopefully the colours are just as nice as the ones in this starter kit.

If you’re not sure if Maven Boxes are for you, there’s a great promotion where you, like I did, can get one for free to try out! All you have to do is enter the promo code ‘freemaven’ when you sign up, and pay for shipping, which was only $3.99 to Canada, a fantastic deal.

Is Julep a brand you’ve heard of before? Are you interested in checking out these Maven boxes? Would you wear any of these colours? I know I’ll definitely be wearing them again in the future!