Happy things with which to end the week (3)

Published March 2, 2013
It’s been a good but busy week! Work has been a lot of work, and I’m working on revising my novel some more (I’m at the halfway mark now, so hopefully it’ll be done this week). I also got accepted for a really awesome opportunity, but I don’t want to say anymore and jinx it. Once it’s officially started, I’ll be sure to share 🙂
My mailbox had some happy arrivals this week, two of which were surprises of the best sort, and one I had been excitedly expecting. 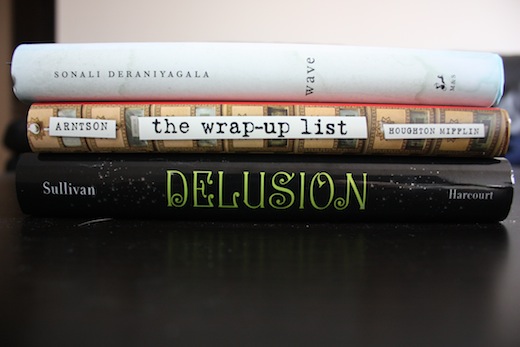 Wave by Sonali Deraniyagala, courtesy of Random House Canada, is a memoir about a woman whose sons, husband, and parents all died in the 2004 tsunami while they were vacationing in Sri Lanka. I’ve already started reading it, and it’s just as devastating– but beautifully written– as I imagined.
The surprises were two young adult novels, The Wrap-up List by Steven Arntson and Delusion by Laura L. Sullivan, which showed up courtesy of Thomas Allen and Sons. I hadn’t really heard much about either title, though The Wrap-Up List, about a world where Death sometimes sends a letter telling people to wrap up their lives before it’s time to depart, and a teenage girl gets one, had made intrigued me and made it on my TBR before. Delusion is about a pair of teenage magicians, set during WW2. I’m not exactly sure if I’ll be reading it or not, but it does have a very sparkly cover.
When I went to pick up the Thomas Allen books, it turned out my mail was at the wrong post office, and while I was at a different drug store I discovered they have a pretty massive nail polish collection. In the discount bins I found a ton of magnetic polish I wasn’t interested in, along with this gem for only three dollars: 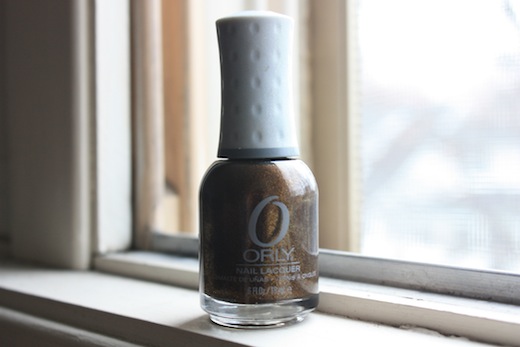 It’s called Buried Alive by Orly. I’ve never owned a normal Orly polish before, because generally I can only find the Quo by Orly line here in Canada. But I love their glitters, and this unusual brown gold immediately caught my attention. I took some photographs of my current polish– a mustard by Nails Inc. to swatch for this site, and I’ll probably do the same when I try this. That’ll probably be tonight or tomorrow, depending on when I feel like removing my current chipped polish. I’m going to try to swatch my colours as I wear them from now on (and not just using my phone). I adore nail polish, and I’m trying to make this blog about things I like, and make it pressure-free and eclectic in a a way my book blog no longer is. Whatever I feel like sharing, that’s what you’re going to find here!
Now I’m back to a weekend of Game of Thrones– rewatching the TV show, not reading the books. I hope you had a happy week as well. If you had any happy things to share, I’d love to know what they are.